Original US Government Works and Other Free-to-use Materials

Original US Government works are not subject to copyright.  The law is about as clear as it can be:

While there is a lot of room for confusion and accidental infringement (for example, state and local governments can copyright their works and US government sites may include copyrights they have licensed or been given), a fantastic place to obtain content for free is US government websites.

So how do you find these free works?  The answer is to use the advanced search operators that Google (or other search engines) make available.

Let's imagine that you want a picture of a syringe for a blog post about vaccinations.  If you use Google image search, unmodified, you get this: 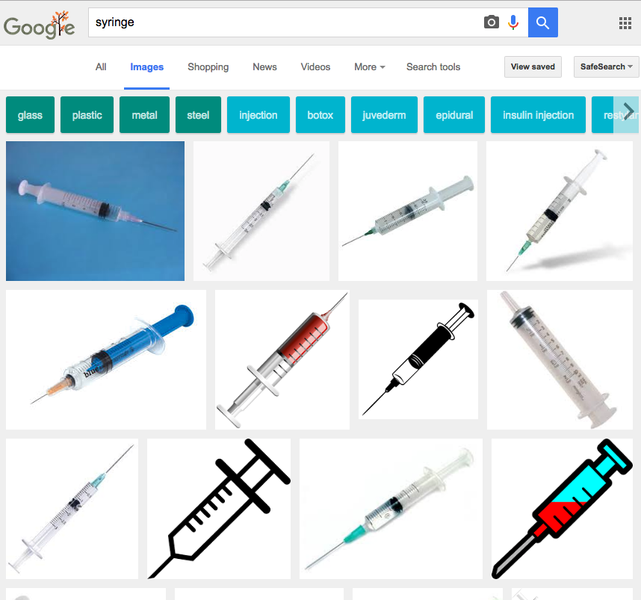 Nice, but these images repreesnt a hodgepodge of copyright states (note that these screen shots fall into a category for another blog post, fair use).  The first image is from Wikipedia under a Creative Commons license; the second image is from bandageer.info and is of unknown source (therefore you need to assume it is copyright under a non-public license); the third image is from an online retailer and is also of unknown copyright status, etc.  In other words, the majority of images are unlikely to be useful to you without running a lot of risk of being sued for infringement.

Going to the advanced search options in Google, I picked "Labeled for reuse with modification" (other options are non-commercial use and reuse without modification).

Google has very much improved their license search capability, so the results are far more likely to be available for use.  However, there remain two big risks:  First, I could upload a copyrighted image to wikimedia, label it as free to use, and trick Google that way.  Since so many people misunderstand copyright, there is a real risk that images can show up as "free to use" that are not.  Second, an improved algorithm does not mean it is a perfect algorithm.  It returned the following image from Flickr:

Seems great!  Except when you click through to the Flickr page, you may notice this text under the image (I say "may" because if you are in a hurry and aren't copyright-savvy, you might just swipe the image without looking):

"Some rights reserved".  When you click on that, you see that you can share, adapt or remix the image except as follows:

Whoops!  If you copied the image and pasted it on your site, and the site says at the bottom "(c) 2016 all rights reserved", or you don't credit and link back to the Flickr page, you are using the image in violation of copyright law and can be sued.

Here is where the advanced search operators help.  My new search is for "syringe site:.gov": 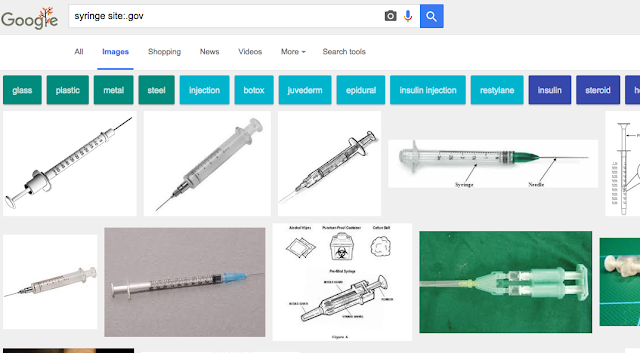 Much better!  Sort of.  The first and third images are from nih.gov and are actually found on a page intended for public reuse.  However, the second is from azdeq.gov -- a state government site.  There is no copyright notice but that doesn't mean you can use it.  You would need to research whether Arizona asserts copyright to its own works (and with both state and federal sites, you'll want to make sure the images are original works of the government and not licensed by the government for use).

Once again, advanced search operators to the rescue.  We only want federal works, so we need to pick some federal websites likely to host the images we want.  For a syringe, we can pick cdc.gov, hhs.gov and nih.gov.  Our query is now syringe (site:cdc.gov OR site:nih.gov OR site:hhs.gov). 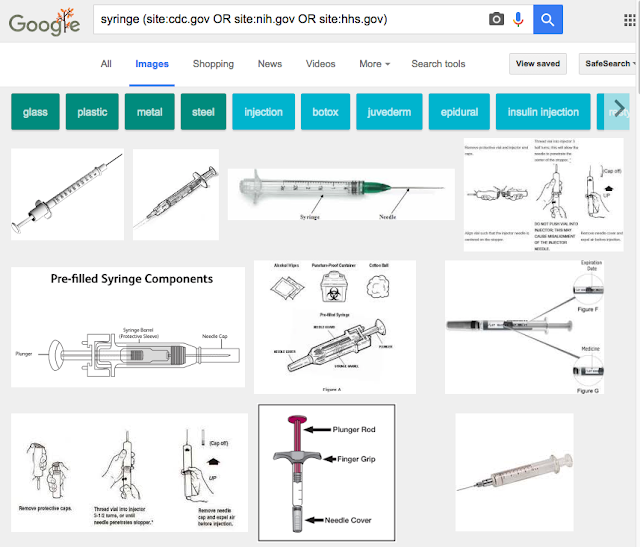 Wow, that's much better.  Now we know we only have images from official US Government sites.  You can use them however you want -- so long as you make sure they are actual US Government creations and not something the government licensed from a third party. You can never really be positive -- after all, even if you called the CDC and they said it was a photograph their employee took in the course and scope of her job, there is a slim chance that she just copied the image from elsewhere and claimed it was her own (even Getty Images has confused sourcing of images in its catalog). This is the same risk you run when buying images from stock photography companies and cannot be fully eliminated unless you take the photograph yourself.   You can at least reduce your risk (particularly for images that are licensed by the copyright holder to the government for its own use) by visiting the page hosting the image, which often clarifies sourcing.

We're now in pretty good shape.  The first image is from the NIH and looks very much like it is intended for use by third parties.  It would be super-misleading for the NIH to put an image they licensed from a third party on a page like this.

But let's be even more paranoid (and at the same time introduce a tool that works to reduce the risk that the image came from a source you were unaware of).  Right click the image of the syringe and from the pop-up menu, select "Search Google for image" (you should do this in Google Chrome if you want to search from the context/right-click menu; other browsers can do this too, but aren't quite as straightforward).  The results are thumbs-up awesome.  While Google's image recognition got it wrong (it looks like it thought the syringe was a cross and called it a religious symbol -- oops), but the important line is "No other sizes of this image found", so it doesn't look like the image was resized from another source.  Similarly, if you scroll down to "Pages that include matching images", you'll see the only other pages with the matching image are hosted at nih.gov (plus a bunch of golf club pages, so we again see the limits of Google's image recognition).  If you're super-careful, you can also use TinEye to do a second search. 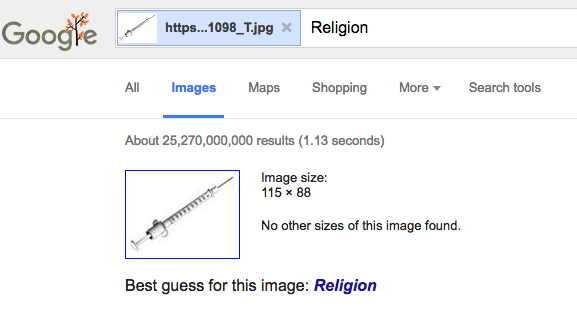 I encourage you to play around with this, using very popular images (such as this official one of the President).

There are some images that can *only* have been taken by the US government, and some of those are fantastic.  For example, images from the Hubble Space Telescope.

The bottom line is that caution is important in using other people's images.  The penalties for copyright infringement are pretty steep.  It is a fairly quick job for an IP lawyer to make sure you're on solid ground, and in my opinion a cheap insurance policy.
Posted by Gary Shuster at 7:15 PM