The importance of the decision to innovators is described in the first paragraph of Justice Gorsuch's dissent (joined by Chief Justice Roberts): 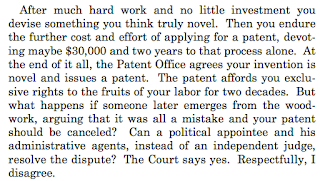 As readers of this blog as aware, getting a patent issued is an expensive, ponderous and risky journey.  In the previous worst case scenario, you spend tens of thousands of dollars -- or more -- only to see your patent application published, your trade secrets passed to the public domain, and no patent issues.  The Supreme Court has far more than doubled the risk.

Now the worst case scenario is that you spend tens of thousands of dollars getting the patent issued, you spend hundreds of thousands (or millions) of dollars investing building your now-patented product, and just as you're hitting the market, an infringer (or want-to-be infringer) files an application for "Inter-Parties Review" ("IPR") by the same patent office that you just spent years in front of getting the patent in the first place.  Your patent is essentially unenforceable during this process (most Federal Courts will stay patent litigation while the patent is in IPR).  Defending an IPR typically costs between $250,000 and $500,000 (though some estimates are $1 million including a Federal Circuit appeal).  In the end, the patent office's politically appointed "administrative law judges" on a "PTAB" panel decide the IPR -- and if the USPTO director doesn't like the result, he can just appoint a few additional judges or even join the appeals panel himself to tilt the outcome.  Former Chief Judge of the Federal Circuit Randall Rader called the USPTO's administrative appeals board "death squads killing patent rights" given the likelihood of invalidating patent claims (83% of claims challenged were invalidated, and 95% of claims challenged and reviewed were invalidated at the time of Judge Rader's quote; the statistics have slightly improved since then).

This is an awesome result if you are a patent infringer.  Despite all of the concern about China stealing US intellectual property rights, the Supreme Court just handed Chinese companies all the ammunition they need to produce products that steal US technology without worrying about patent suits.  A quick trip to the PTAB and the patent that protects the technology that company would like to infringe can disappear without any of the due process protections American inventors have come to expect from review by an actual Senate-confirmed Article III judge.  No judge, no jury.  Just a group of political appointees running roughshod over patents.

The Court found solace in the right to appeal a PTAB decision to the Federal Circuit Court of Appeals.  However, the Federal Circuit is already so overwhelmed with such appeals that it has taken to issuing summary affirmances of the PTAB decisions (in fact, Oil States itself was an appeal of a single word decision by the Federal Circuit:  "Affirmed").  So while there is a route for judicial appeal, it comes after the property right has already been stripped by the administrative agency.  A good analogy would be a house.  Imagine that you purchase a house, make the mortgage payments for a few years, and suddenly find that a group of political appointees says you never owned the house in the first place.  This is now the status quo for inventions.

The Supreme Court first found that patent rights are different than other property rights.  Unlike houses, patent rights are now considered to "fall[] squarely within the public-rights doctrine".  Because patents are a matter between the federal government and an individual or company, and not between two individuals or companies, they are considered "public rights" and as such susceptible to revocation by the government.  This decision comes in a context where the Supreme Court is considering whether to decide if state governments can simply seize property they suspect was used to store or transport illegal drugs.  If the Court was looking for a way to allow the government to seize patents but still protect the right of citizens to due process before the seizure of private property, the public/private rights distinction provides a roadmap.  Without that context, it is difficult to imagine how the Court would have required a real court to review seizures of property while allowing political appointees to review seizures of patents.

The Court's holding is ultimately summarized by a pithy quote from the case:

Curiously, the Court also recognizes that "inter parties review involves the same interests as the determination to grant a patent in the first instance" but does not address how repeated IPR challenges can keep a patentee from ever effectively enforcing the patent.  Because Article III courts can, and regularly do, stay litigation over infringement while an IPR request is pending, a sufficiently funded infringer can keep a patent in legal limbo essentially for the life of the patent.*  Presumably this is something that a functioning legislative branch would want to fix, particularly given the concern over Chinese theft of US patent rights.

Perhaps the worst aspect of the decision was a doubling down of the uncertainty involved in patent ownership:  "We do not address whether other patent matters, such as infringement actions, can be heard in a non-Article III forum."  In theory, this opens the door for the taking the patent system entirely out of the courts.  While that case was not before the Court, the curious need to mention that limiting infringement actions to administrative proceedings before the patent office might be constitutional is yet another piece removed in the Jenga game that the patent system has become.  At some point, having this level of uncertainty is going to tip companies entirely out of the patent system and into a trade secret system (which now has a federal statute protecting it).

The Court does leave several options open for additional challenges:

The split of judges on the Court is interesting.  Justices Breyer, Ginsburg and Sotomayor (two Clinton appointees and an Obama appointee) go out of their way to clarify, in a concurring opinion, that "the Court's opinion should not be read to say that matters involving private rights may never be adjudicated ... by agencies."  In other words, there are three votes that are open to an argument allowing private property rights such as ownership of real estate to be adjudicated by political appointees and not by a jury.  The Chief Justice and Justice Gorsuch (Bush 43 and Trump appointees respectively) dissented from the decision.  We can conclude there are three justices willing to extend Oil States to additional private property and two justices who back Article III protections for private property (since they backed it for patents).  It would take only half of the four justices who did not opine on Article III applicability to private property rights to agree with Breyer, Ginsburg and Sotomayor, and jury trials for taking certain private property may disappear.  In my opinion, the likelihood of such an outcome is vanishingly small, as it would render the Seventh Amendment toothless.

* Technically the same party cannot raise the same issue at the PTAB and in court, and parties are not supposed to collude to prevent this "estoppel" from attaching.  As a practical matter, however, it is not uncommon to see a one entity being sued while another entity puts the patent in litigation into IPR.  This can be done through entities (Unified Patents, for example) or by the first company doing favors for other companies by putting patents into IPR in hopes (which usually are realized) that the other company will put patents the first company is being sued for into IPR as a way of returning the favor.  Congress could easily eliminate the risk of such abuse by adopting simple legislation, such as "a patent may not be invalidated in court or administrative proceedings based on issues raised in any previous administrative proceeding."  This would greatly level the playing field, as currently, every patent defendant can raise the identical issue in every court.  Such legislation might be challenged on due process grounds, claiming that there is a constitutional right to defend against infringement suits on the same grounds as another defendant previously raised and lost.  The Oil States court's heavy emphasis on the deference to be granted Congressional rules on review of patents make such a challenge more difficult.
Posted by Gary Shuster at 9:27 AM