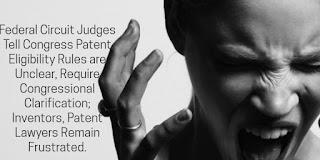 President Trump's new head of the United States Patent and Trademark Office, Andrei Iancu, recently noted that uncertainty about what kinds of innovation are patent-eligible is weakening investment, growth, and jobs in high tech industries:


I do worry that the current state of Section 101 in patentable subject matter weakens the robustness of our IP system in the affected areas.  And if industry cannot predict in a relatively reliable way whether their investments will be protected from an intellectual property point of view I think that will result in less investment, less growth, fewer jobs created in the affected industries.  So I do think it is critically important for our economy.  And again whatever industry we’re talking about and whatever industry we want to grow it’s critically important to have a strong reliable and predictable intellectual property system.

Yesterday, two well respected and long-serving judges on the Federal Circuit Court of Appeals (the court designated to handle all patent appeals), Judges Lourie and Newman (with 66 years of experience hearing patent appeals on the Federal Circuit between them), echoed Director Iancu's concerns.  In a concurring opinion, they wrote separately to say that Congress needs to clarify the kinds of inventions that are patentable:


I concur in the court’s declining to rehear this case en
banc. There is plausibility to the panel holding that there
are fact issues potentially involved in this case concerning
the abstract idea exception to patent eligibility. And the
panel, and the court, are bound to follow the script that
the Supreme Court has written for us in § 101 cases.

However, I believe the law needs clarification by
higher authority, perhaps by Congress, to work its way
out of what so many in the innovation field consider are
§ 101 problems. Individual cases, whether heard by this
court or the Supreme Court, are imperfect vehicles for
enunciating broad principles because they are limited to
the facts presented. Section 101 issues certainly require
attention beyond the power of this court.

Director Iancu further indicated that the Trump Administration is interested in strengthening the patent system:


Still, we are at an inflection point with respect to the patent system. As a nation, we cannot continue down the same path if we want to maintain our global economic leadership. And we will not continue down the same path. This administration has a mission to create sustained economic growth, and innovation and IP protection are key goals in support of that mission.

Well respected commentators have been even more explicit in laying the blame for the weakened United States patent system at the feet of the Supreme Court.

As an inventor, I have frequently spoken on the subject of innovation.  One point I have repeatedly made is that it would be far better to have bad rules than to be unsure of what the rules are.  Given the current state of confusion about which inventions are patent-eligible, it would be hard for even the most dysfunctional Congress to worsen the situation. The alarming uncertainty in the U.S. patent system seems to finally be getting the attention it badly needs.

While we await Congressional action that may or may not come, it is all the more critical that inventors turn to experienced patent lawyers capable of laying out the pros, cons, and unknowns about inventions.
Posted by Gary Shuster at 3:03 PM No comments: